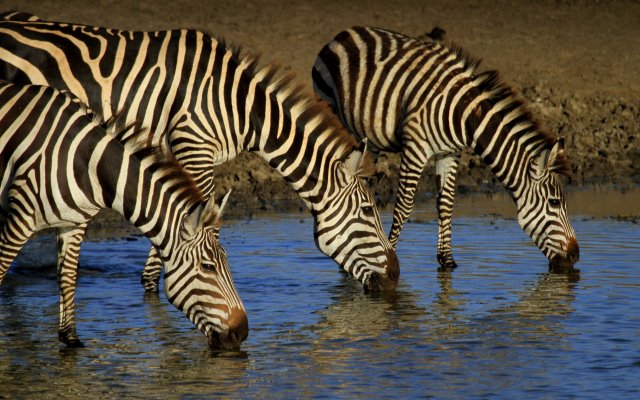 Upon arrive in Nairobi at Jomo Kenyatta International Airport, Meet and greet by our local representative African Paradise Safaris and their Guides. You will be transferred to city hotel. Depending on your arrival time have a city tour, visit to giraffe park or relax at the hotel.

Have your breakfast at the lodge in leisure, later depart for Tsavo East National Park. With enroute game drive on your way. Will arrive in time for lunch. After lunch you will have an afternoon game drive.
The Joint mass of Tsavo West and Tsavo East National Parks forms one of the largest National parks in the world and covers a massive 4% of Kenya’s total land area. Tsavo East the larger of the two, lies to the east of the Nairobi –Mombasa road, equidistant between Nairobi and Mombasa, and offers a vast and untapped arena of arid bush which is washed by azure and emerald meandering of Galana River. Guarded by the limitless lava reaches of Yatta plateau and patrolled by some of the largest elephant herds in Kenya.

You will have a full day in the park with your morning and afternoon game drive.
Attractions in the park Elephant in Eden - The sight of dust-red elephant wallowing, rolling and spraying each other with the midnight blue waters of palm-shaded Galana River is one of the most evocative images of Africa
Aruba Dam - The beautiful Aruba dam located on the north bank of the seasonal Voi River, is visited by thousands of animals and a great game viewing destination
Mudanda Rock - This whale –backed Rock towers above a natural dam, which acts as a draw to thousands of Elephants
The longest lava flow in the world- at 300 kilometers in length, the heat shimmering edge of yatta plateau is the longest lava flow in the world and an ornithological paradise that attract migrating birds from all over the world.

After Breakfast depart to Amboseli National Park, set against the legendary Mount Kilimanjaro, Africa's highest mountain. Amboseli is home to the “Big Five” of African wildlife: elephant, rhino, lion, buffalo and leopard. The view of the Amboseli plains, with elephant moving below the snow-capped peaks of Mount Kilimanjaro, is one of the most photographed vistas in Africa. A network of swamps and wetlands ensure excellent game viewing year-round. Upon arrival in the park have an enroute game drive heading to the lodge. Check in and enjoy your lunch. After lunch embark to an afternoon game drive with an expert game driver.

Full day exploration of the park. After breakfast depart to morning game drive. Transferred to your lodge for lunch at leisure. Embark to an afternoon game drive. Later you will return to the lodge for dinner. You will be able to see the peak of Mt Kilimanjaro, Big 5’s and more than 400 birds species.

You will have your morning breakfast at the lodge. Then depart Lake Naivasha, where you will arrive in time for lunch. Afternoon have boat ride.
Lake Naivasha is a beautiful freshwater lake, fringed by thick papyrus is almost 13 km's across, but its waters are shallow with an average depth of five metres. The waters of the lake draw a great range of game to these shores.
Giraffes wander among the acacia, Buffalo wallow in the swamps and Colobus monkeys call from the treetops while the Lakes large hippo populations sleep the day out in the shallows.

Breakfast at the lodge, later depart to Maasai mara national park, Upon arrival in the park you will have an enroute game drive heading to the lodge, for check inn and lunch. You will have an evening game drive. Later return to the lodge for dinner and overnight. An exploratory drive around the 1,792 sq. km game park with its low hills and savannah type rolling grasslands, gallery forest on the Mara River and its tributaries. Get introduced to the herbivores; elephant, rhino, buffalo, and the variety of antelopes, the Masai giraffe and the Burchell zebra. The carnivores are the black mane lion, cheetah and leopard. Also to be seen are the largest bird, the Masai ostrich, the Secretary bird, the crested crane and saddle-bill stork. Crocodiles and hippos share the river.

Optional Early Morning balloon safari ride (US$450.00 per person ) across the Maasai Mara plain. Breakfast at the lodge then enjoys morning and afternoon game drives. Masai Mara is an extension of the Serengeti ecosystem to the south. Game abounds here; The Mara is noted for its abundance of lions – particularly the superb black-maned males. Where great Migration over 1.5 million wildebeest and other antelopes crossed the mighty Mara River. You are also likely to see lots of elephants here often in large herds, as well as – if you're lucky leopard, cheetah and rhino. All of the Big Five are residents. You're sure to see the African buffalo. Get the cameras ready, stock up on film/tapes, and enjoy yourselves! In the evening visit Maasai village.

Waken by marching elephants and sounds of birds. Have breakfast at your lodge. Check out and drive through the cool Rift Valley environment towards Nakuru. Drive through the park and arrive at your lodge in time for lunch. Have an afternoon game drive at Lake Nakuru National Park. Nakuru is a small park with over 50% of its area covered by the Lake. Located in the middle of the Rift valley, L. Nakuru has a wide variety of animals which includes the Rothschild Giraffe, Lions, White, and Black rhinos as well as the Leopard. All these can be spotted depending on your luck. The park is also considered by birdwatchers as an ornithological paradise! A myriad of both Greater and lesser flamingoes has made this lake their home.

After your morning breakfast drive to Samburu. arriving in time for check-in and lunch. You will have some rest before you embark on the evening game drive in the famous Samburu game reserve, which is known for its “special 5”. If lucky you will be able to see them as they include; Reticulated Giraffe, gravy’s zebra, gerenuk, Somali ostrich, and Baisa Oryx.

Wake up call at 0600 hrs, tea/coffee and cookies at the lobby. Set off for the early morning game drive in the reserve. Return to the lodge for breakfast at the lodge and thereafter, the rest of the morning will be at leisure. Lunch will be served at the lodge, and in the evening, set off for the late evening game drive.
The landscape of the Samburu area is beautiful - arid and scrubby with magnificent mountains in the background. An unusual forked palm; the doum palm, grows along the banks of this river and adds striking beauty to the panorama. Wildlife is surprisingly abundant for such a dry place and includes several species, which are unique to the area such as; gerenuk gravy’s zebra, beisa Oryx, reticulated giraffe, and Somali ostrich. Not to be overlooked are the hundreds of species of birds to be found here. This is home to the Samburu people, “cousins” to the Maasai and the young warriors’ colorful dress and ornamentation distinguish them from other members of the tribe.

Breakfast at the lodge, have en route game drive at the park, and drive to Nairobi where you transferred to the airport for your home flight. Bring to an end of Kenya wildlife migration tour.

Starting From $ 2,590 Per Person Sharing